We’re two weeks into the Financial Freedom Book Tour and things are going great. For one, Grant and I haven’t killed each other yet. That’s a win! We’re actually getting along perfectly. Second, the feedback and support we’ve received from the community are truly incredible. We couldn’t have possibly imagined how massive our impact actually was.

This tour isn’t even close to over though, we still have 30+ cities to tackle! Be sure to check out the Financial Freedom Book tour page for an event in your area.

We woke up to the sound of ocean waves in Wilmington, NC. Shortly after, we were approached by a 70-year-old man who liked our van and we chatted with him for a while about Financial Freedom and he ended up leaving with a copy. 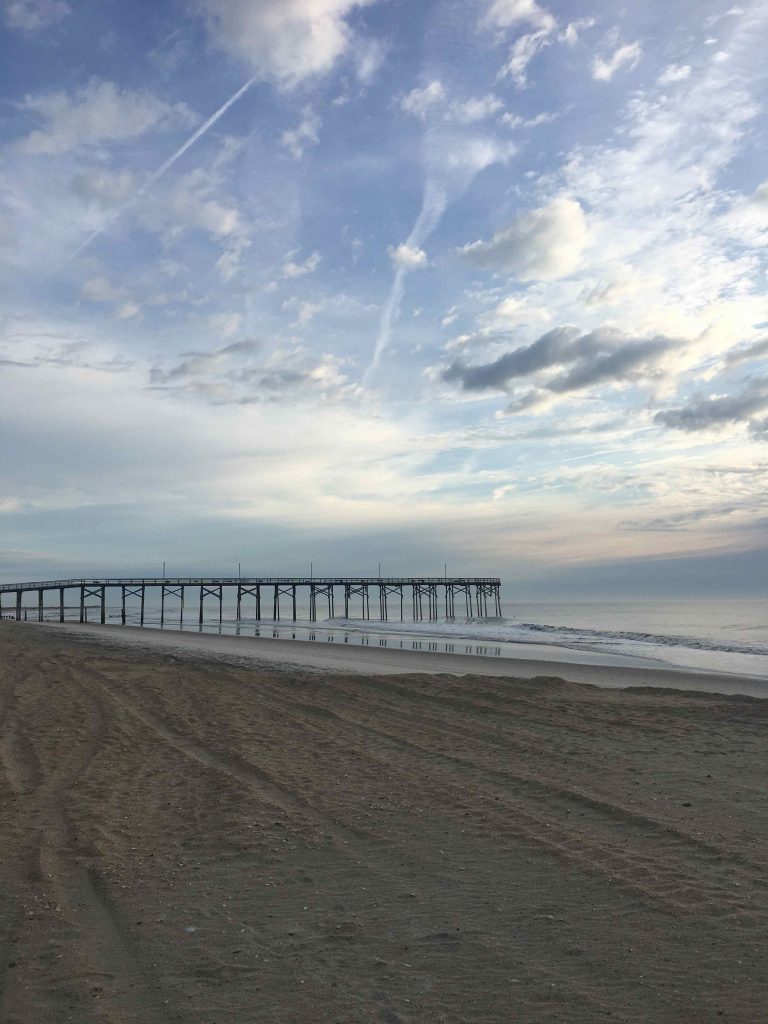 Afterward, we drove down from Wilmington to Oak Island and hung out on the beach for a while before grabbing dinner at the infamous Shagger Jacks. That night, we drove down to Myrtle Beach and rumbled through the main strip. I literally think that every chain in America was on that strip. We finally ended the night at the Myrtle Beach State Campground.

Grant and I couldn’t get enough of the 75 and sunny weather. We chilled on the beach for a while and read, relaxed, and caught up on some online stuff. After getting some (too much) sun, we grabbed lunch on the pier at Pier 41. 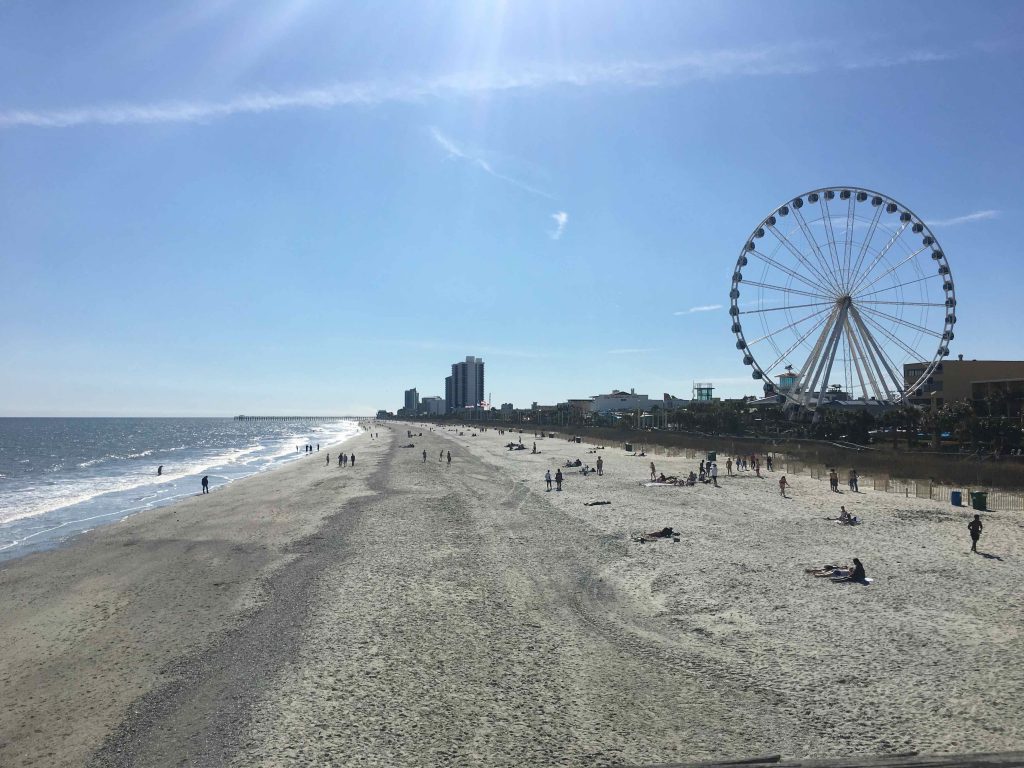 After hitting the gym, we made our way down to the coastal city of Charleston, SC. Our aching hunger led us to the River Room Restaurant in Georgetown which had quite possibly the best food we’ve eaten this whole trip.

One thing we are quickly learning is that if you don’t book your accommodation in advance, you might not get any. Consequently, all the campgrounds were full or closed and we ended up parking in a little inlet by the beach. Nothing is easier than falling asleep to the sound of crashing waves!

We woke up by the beach on Folly island and enjoyed the sun for a bit before heading over to the Lost Dog Cafe for a cup of coffee. We drove up to the historical district of Charleston and walked around and stopped in all the quaint little shops and markets. 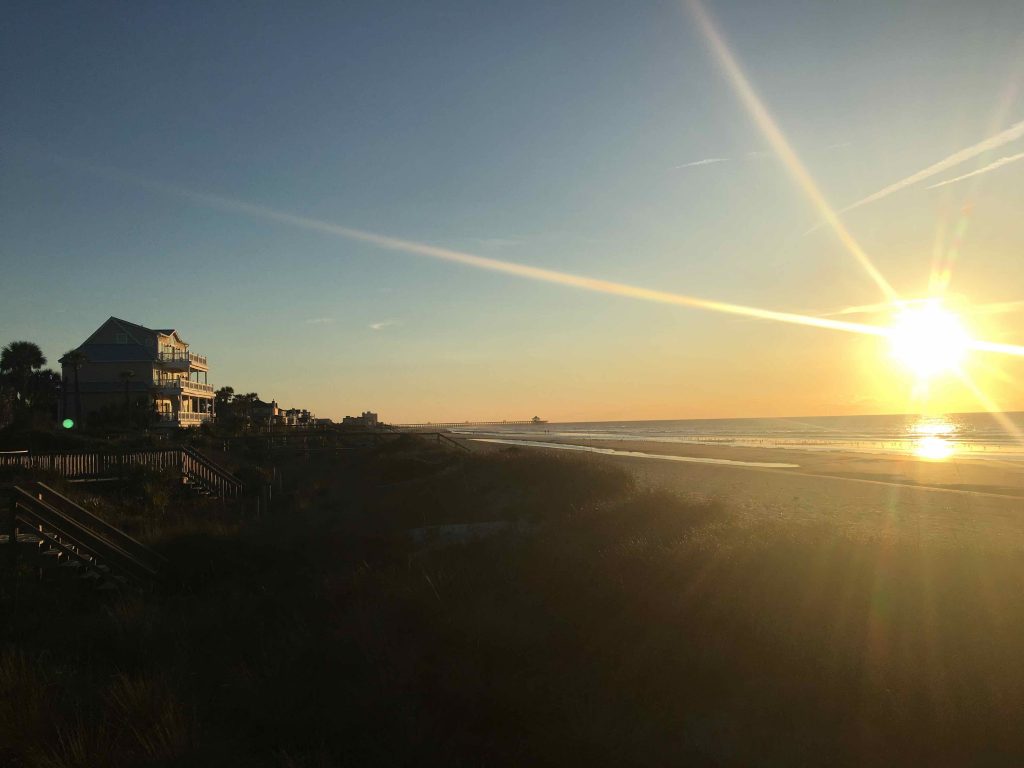 Grant had a couple of long phone calls that afternoon, so I decided to take an 8.5-mile jog to Planet Fitness for a workout — I was wiped. After he picked me up from the gym we headed down to Savannah Georgia for the night (fortunately we booked our accommodation in advance).

We stocked up on groceries and then checked in to Fort McAllister State Historic Park to set up camp. As we were grilling our freshly bought chicken, salmon, and catfish, our neighbors came over to say hello. It was one of their birthday’s and we stayed up chatting and drinking with them til’ about 2 AM before calling it a night.

We left our campground around 11:00 AM and headed to Savannah, Georgia to catch up with our friend Chris for lunch. I have to say, out of all the cities we visited so far, Savannah was by far my favorite. The city had a hip vibe to it and there was tons of nature on every block. 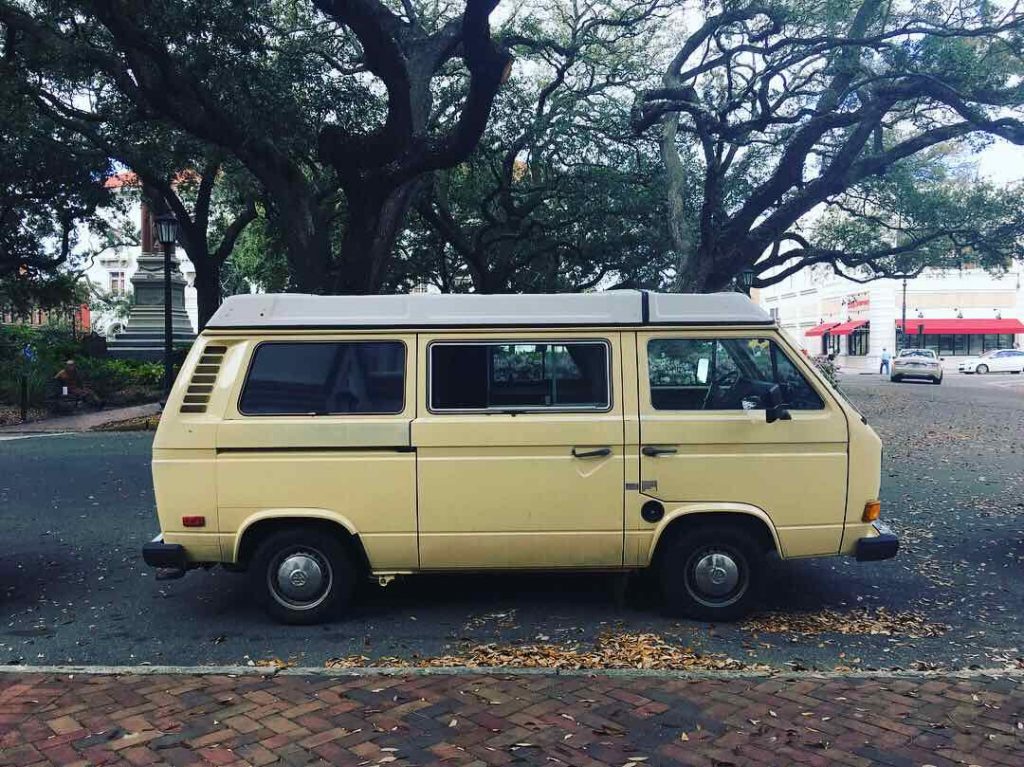 We left Savannah around 4:00 PM and made our way down to Macon, Georgia to camp for the night. On the way, we stopped at an awesome BBQ joint in Swainsboro. They had never met anyone from Boston or NYC and all gathered around to look at us in the van haha. We made it to Prairie Creek campground around 8:00 PM and called it a night.

In the morning, we left the campground fairly early and grabbed breakfast a local diner. Then, we headed into Macon to visit the Allman Brothers’ gravesite. After jamming out and paying our respects, we started to make our way to Atlanta.

Before arriving at our event venue, Grant and I grabbed some local BBQ for dinner. We got to Monday Night Garage (the brewery) around 6:45 PM and welcomed people as they showed up. It was a great turnout! We had about 35 people come from all over the state. I caught up with old friends, made some new friends, and had an overall great time. 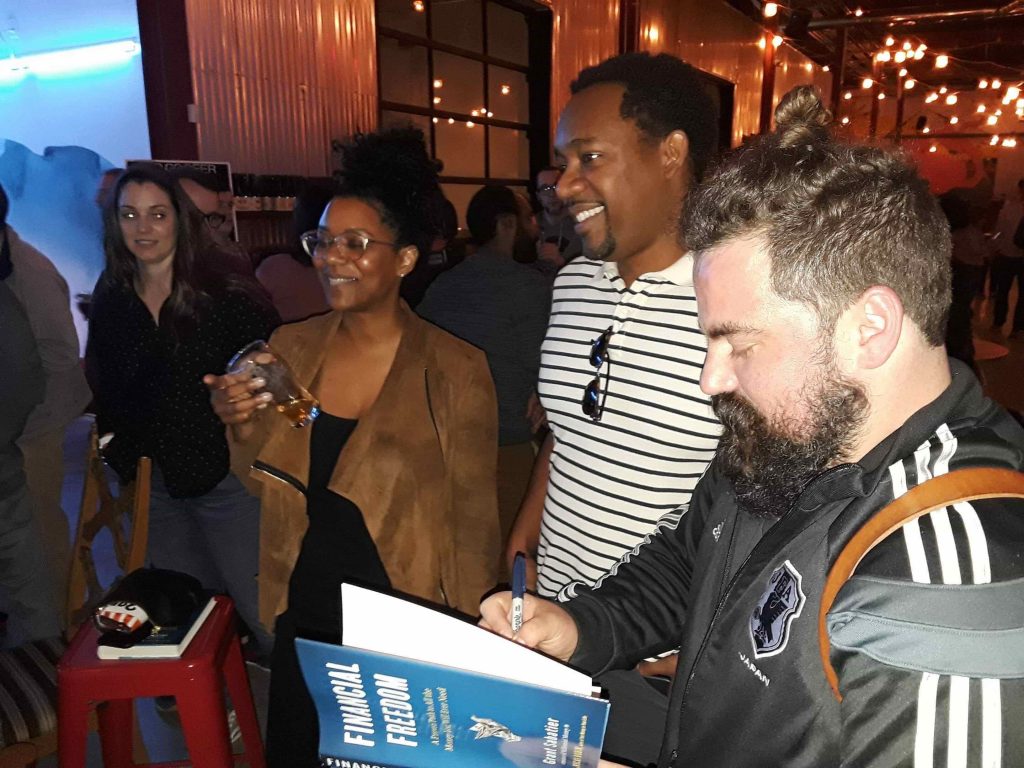 After definitely drinking a few too many beers and staying out til’ 2 AM, Grant and I crashed at Chris and Anna Williford’s place (they’re awesome…southern hospitality at its finest).

Unfortunately, I forgot to plug my phone in so Grant and I overslept and missed breakfast with Joel and Matt from How To Money (sorry we suck, guys). After saying our thankyous and goodbyes to our generous hosts, we headed into the city to explore Atlanta for a bit.

We spent most of the day walking around Little Five Points. It was like walking back into the 1980s. The whole area was super retro and had a throwback type of vibe to it. We headed out around 4:00 PM and took the scenic route down to Montgomery, Alabama. We set up camp in Woods RV Park and got some rest before our next event. 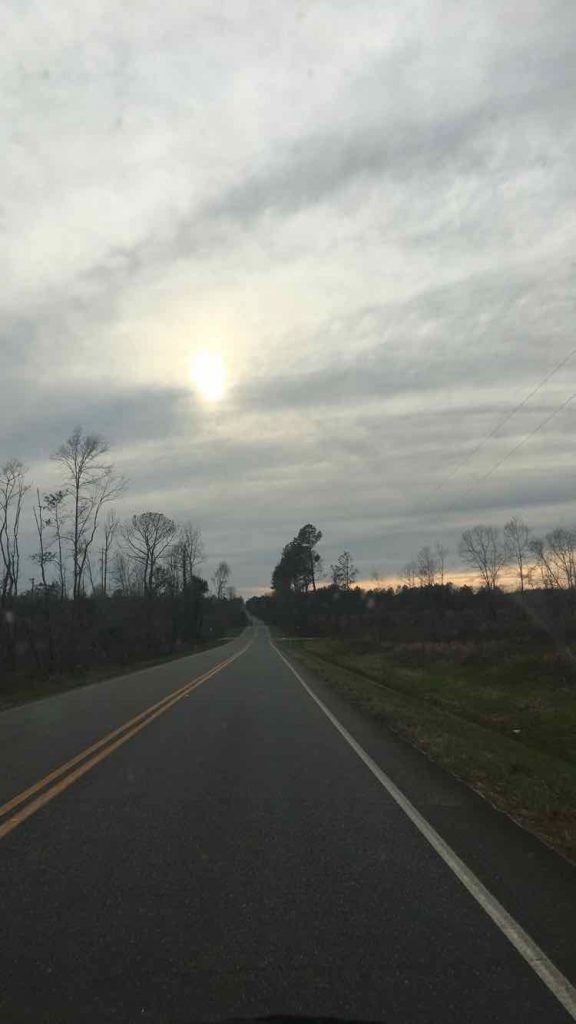 We woke up around 7:30, got some online work done, and cooked a delicious breakfast in Tom (the camper van). We drove into the city of Montgomery to get our daily workout and shower in at the local Planet Fitness, and then headed to the F. Scott and Zelda Fitzgerald Museum for a brief tour and history lesson. 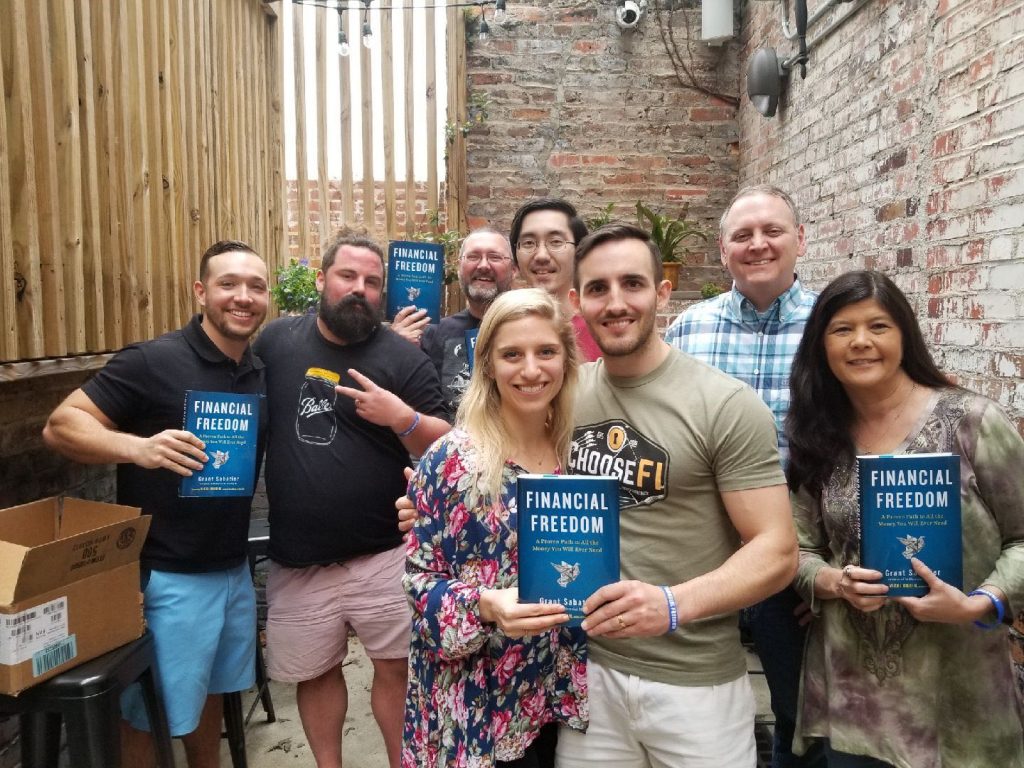 At 3:00 PM, we moved over to Common Bond Brewery for a meetup with the local groups in the area. It was great to catch up with old friends, make some new friends, and of course, enjoy some craft beer! We left around 6:30 PM and made way for our campground on the water in Mobile, Alabama for the night.