It’s honestly crazy that we’ve only been on the road for a month now. It feels like we’ve been doing this forever. We have our rhythms and routines down pat. Tom (the van) saw some hardship, but he persevered through. We started the week in Santa Fe, NM and ended up all the way over in San Diego, CA.

As we continue to book new venues, be sure to check out the Financial Freedom Book tour page for an event in your area.

We woke up in Ranchero Campground around 7:30 and started the day with eggs and bacon for breakfast. After catching up on work for a couple of hours, Grant and I finally got a chance to install our solar-powered battery. We felt unstoppable after it started working! 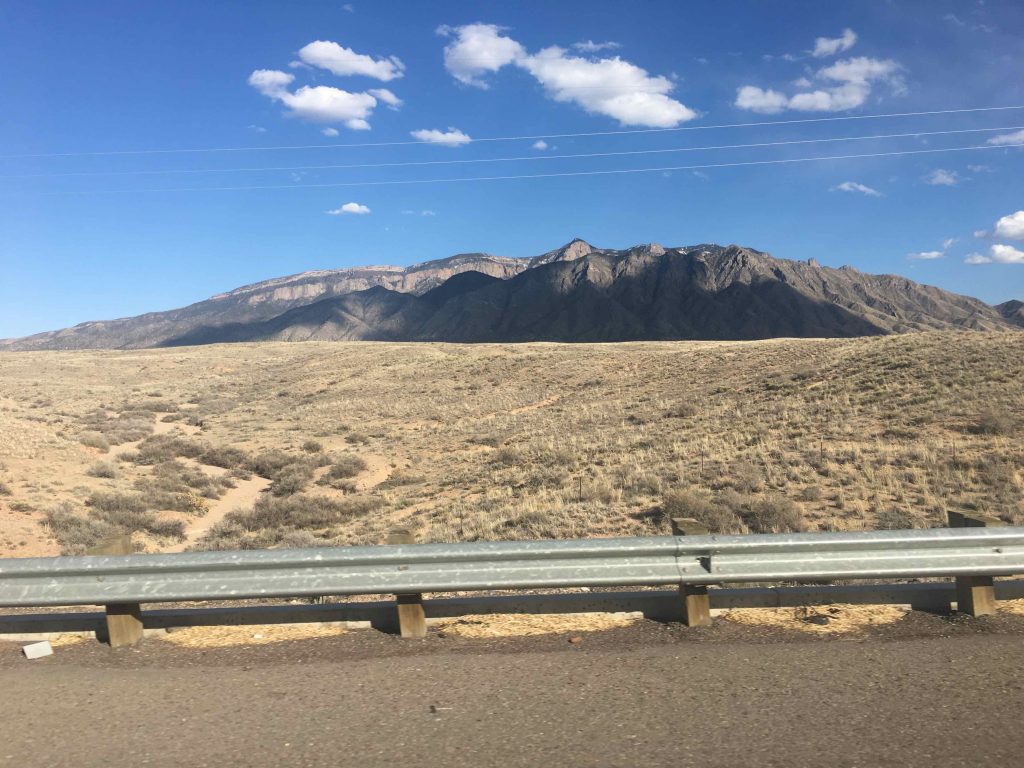 For lunch, we visited Annapurna’s, a famous vegetarian restaurant located in downtown Santa Fe. After, we headed back toward Albuquerque to make some progress on the next leg of the trip. We stopped at Planet Fitness for a workout and a shower and then headed out toward Sedona. We made it a couple of hours before complete exhaustion and ended up staying in a KOA in Holbrook, AZ.

Our bodies clearly weren’t quite adjusted to the time change yet since we woke up at 6:00 AM on the dot. We left the campground at 6:30 and after realizing that we were only 2 hours from the Grand Canyon, we changed our course on a whim.

I had always wanted to visit the Grand Canyon and it blew my expectations out of the water. It was so much bigger and more expansive than I could have imagined (hopefully this picture can do it some justice)! 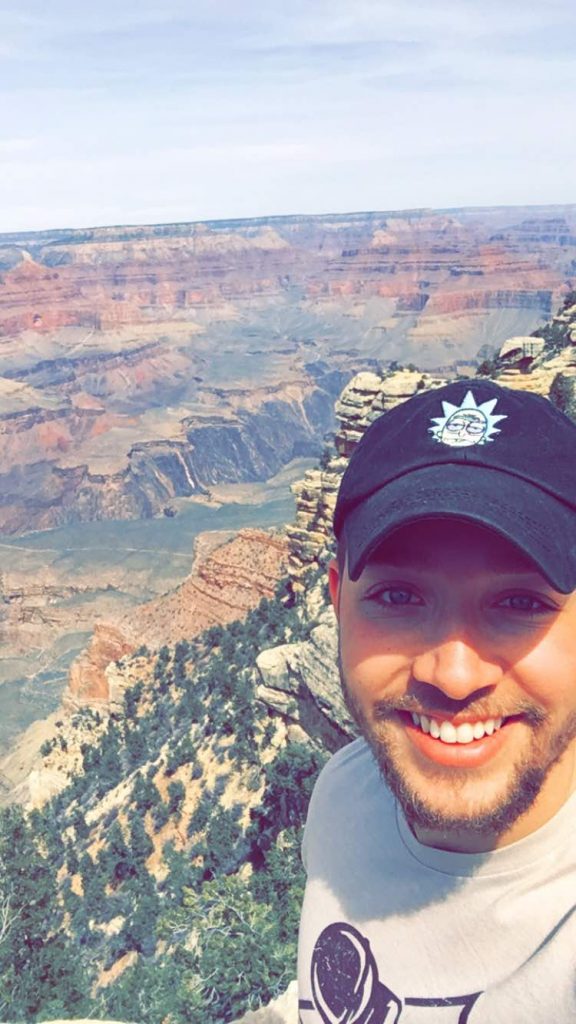 After exploring the canyon for a couple of hours, we drove down to Sedona to find a place to camp for the night. Although most of the mountain locations were booked up, we found an incredible campground just next to Red Rock State Park. We hit up Planet Fitness, showered, returned to the campsite and passed out.

We woke up to the fantastic view of a red rock cliff just 10 miles south of Sedona. After cooking up some salmon and eggs for breakfast, we drove over to the base of Cathedral Rock.

Grant and I split ways for a couple of hours and I took the time to hike up to Cathedral Rock. After reaching the top, taking some pictures, and realizing how much time I had left to kill, I forged a new “trail” to the mountain on the left (would not recommend). 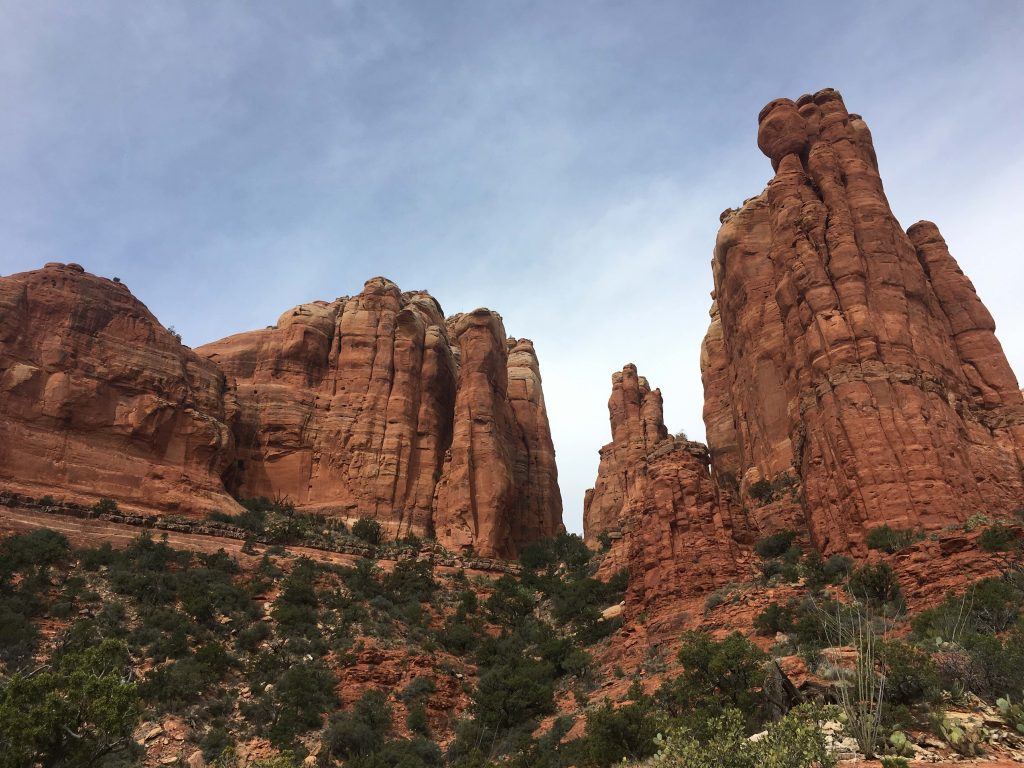 We finally met back up around 12:30 and grabbed lunch at a Mexican place called Tortas de Feugo. About 200 feet away from the restaurant was an ATV rental company … we couldn’t resist. We spent the next three hours tearing through Sedona’s rocky paths and getting up close and personal with the red rocks. It was probably the most exhilarating thing we’ve done thus far!

After we returned the ATV, we grabbed a quick salad, then visited our home away from home (Planet Fitness) for a workout and a shower. Around 9:00, we finally made it back to Camp Avalon and called it a night.

We left Camp Avalon around 6:30 AM to make our 9:30 AM event at Coronado High School in Phoenix. A huge thanks to Athena Lent for helping us coordinate speaking engagements with two high school classes in the JAG (Jobs After Graduation) program! The kids were ecstatic to learn about Financial Freedom and nearly everyone collected a free book. 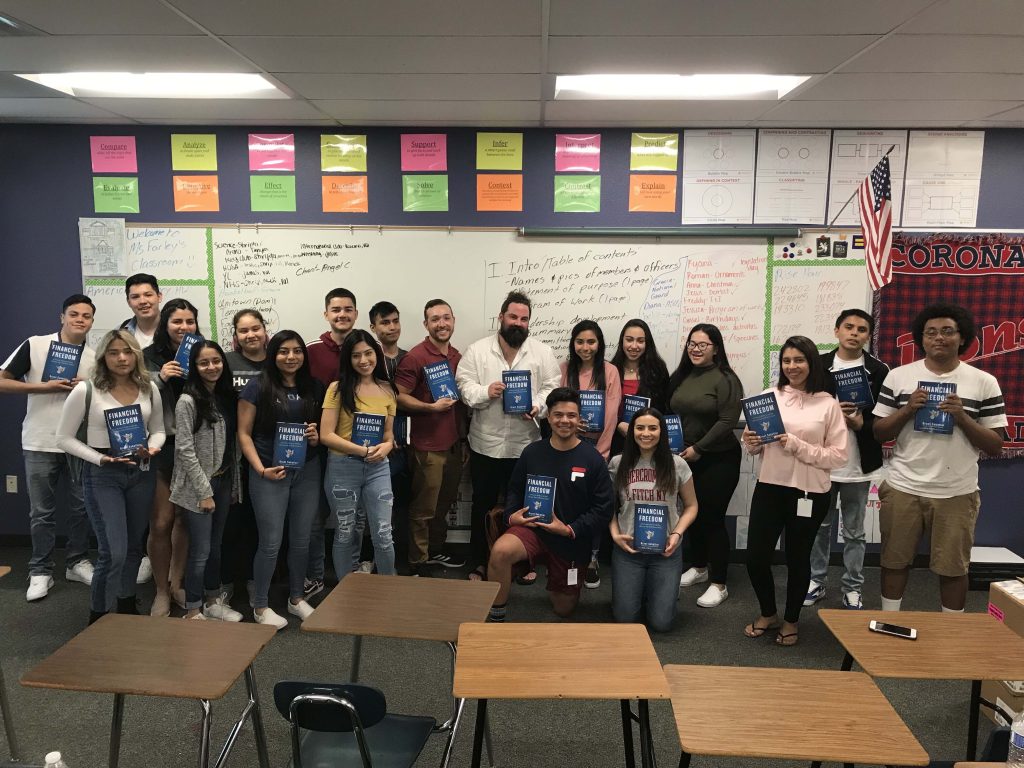 After the two classroom events, Grant and I went into downtown Mesa and checked out some of the local stores. We ended up chilling in Jarrod’s Coffee Shop and catching up on work for a few hours before our next event.

Around 6:30 PM we headed over to True Garden for our meetup event. Grant gave a presentation followed by Q&A and mingling. We met so many awesome people and the turnout was amazing! Thank you, Renata Smith and Ashley Barnett for helping with logistics. When the event was over, we drove Tom up to North Phoenix Campground to crash for the night.

Since we had a 6-hour drive to San Diego ahead of us, we hit the road bright and early at 7:00 AM. We made it almost halfway before stopping for lunch at Tacos Mi Ranchito, an authentic Mexican restaurant in Yuma, AZ.

We drove through the winding mountains on Interstate 8 and made it just 45 minutes away from our destination until all hell (kinda) broke loose around 2:30 PM. First, we noticed a tear in the tire and tried to replace it ourselves. Unfortunately, the lug nuts were on way too tight and we had to drive 20 miles to a tire shop. 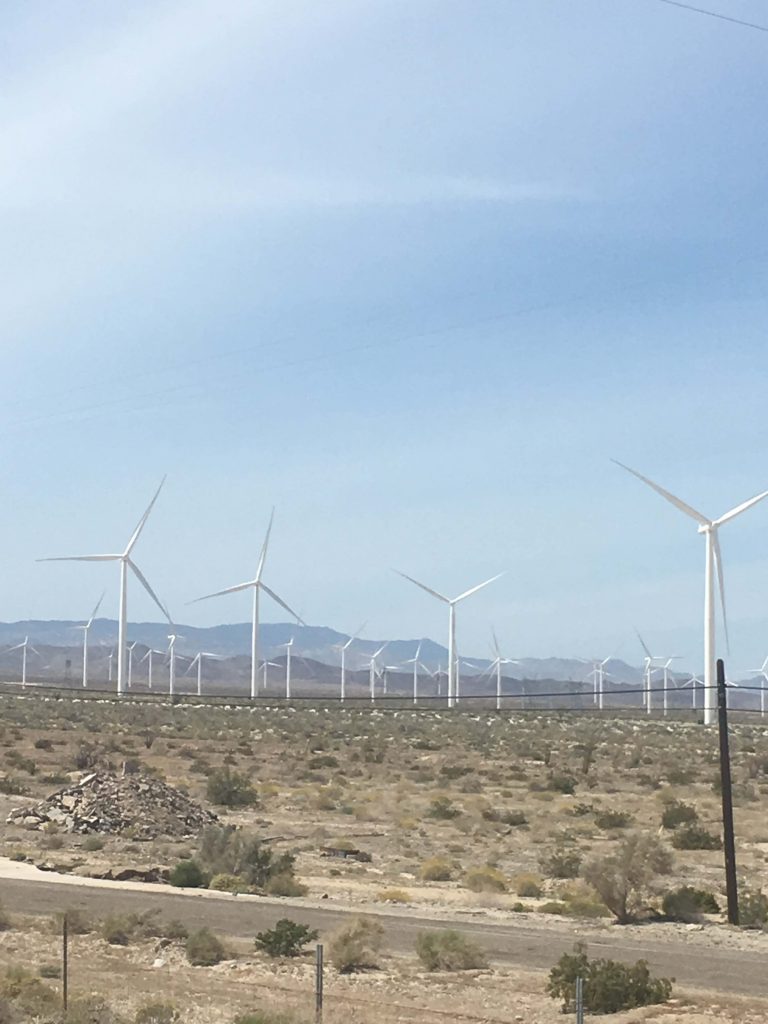 Then, after getting the tire changed, the van suddenly wouldn’t start. We tried everything and eventually convinced a Westfalia-specific repair shop to stay open for us and check it out. The issue ended up being a fuel pump relay and after about an hour of messing with the van, we were back on the road at 7:30 PM (Yes, this whole van thing took 5 hours).

We finally got to Grant’s friend Trevor’s house to park the van and then Lyfted downtown to grab some food and drinks. We got dinner at Oscar’s Mexican Seafood and then hit up Bay City Brewery and ended the night at Trevor’s house (thanks for the hospitality, man!).

After a quick shower and coffee, we headed to our first event at Scripps Ranch Library. We were astonished to see how well it had been organized by Jennifer Mah! There were nearly 80 people in attendance. Grant and I both shared our stories and then answered a slew of questions from the audience… we talked for almost 4 hours! 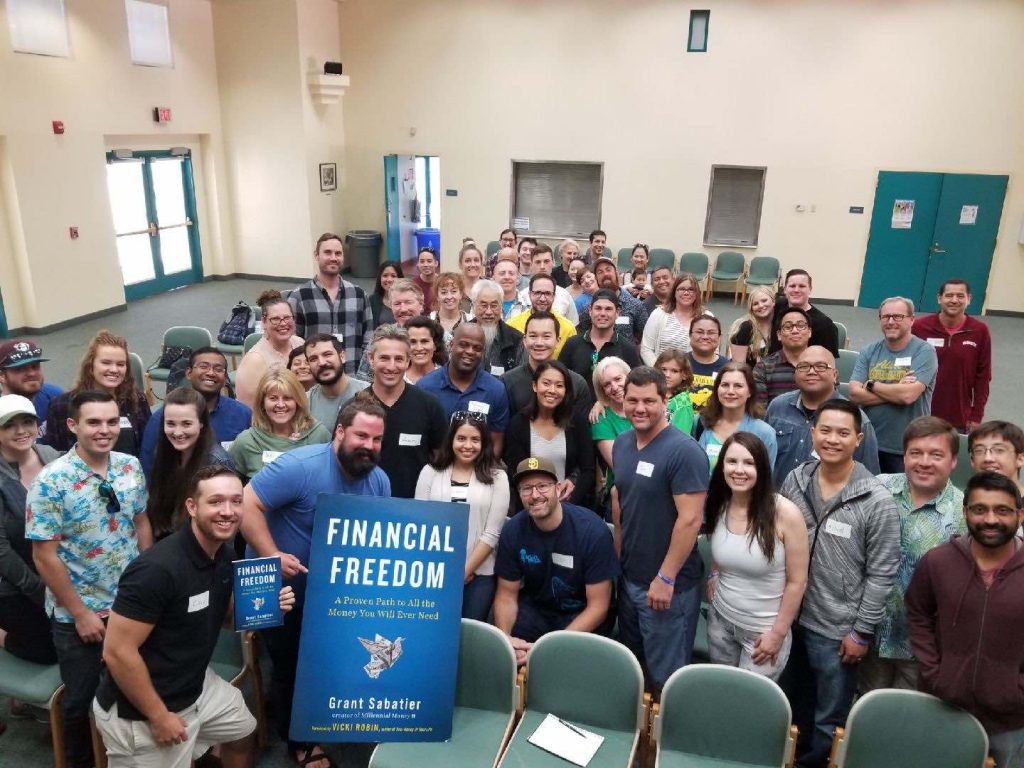 We were supposed to meet up for lunch afterward, but then Tom decided to stop cooperating. We spent the rest of the day messing with the fuel pump relay (we even Ubered an hour to grab a part) with no luck. We ultimately ended up bringing the van to a California Westy’s — a repair shop specific to our vehicle.

We met up with our friend Robert from The College Investor for dinner at Banker’s Hill and had a great time reconnecting over some fantastic food and drinks. We had to cheat on Tom for the night and crash in a hotel downtown.

We checked out of our hotel and Ubered to our meetup event at LeStats Hillcrest. There were some familiar faces from the day before and some new faces as well. We hung out and chatted for almost 3 hours before we had to go and check on the van which was still in the shop.

Unfortunately, it wasn’t ready yet, but Grant’s friend Trevor was kind enough to chauffeur us around and give us a city tour. We hiked down to Sunset Cliffs and then spent some time at a bar right on Ocean Beach. San Diego is paradise! 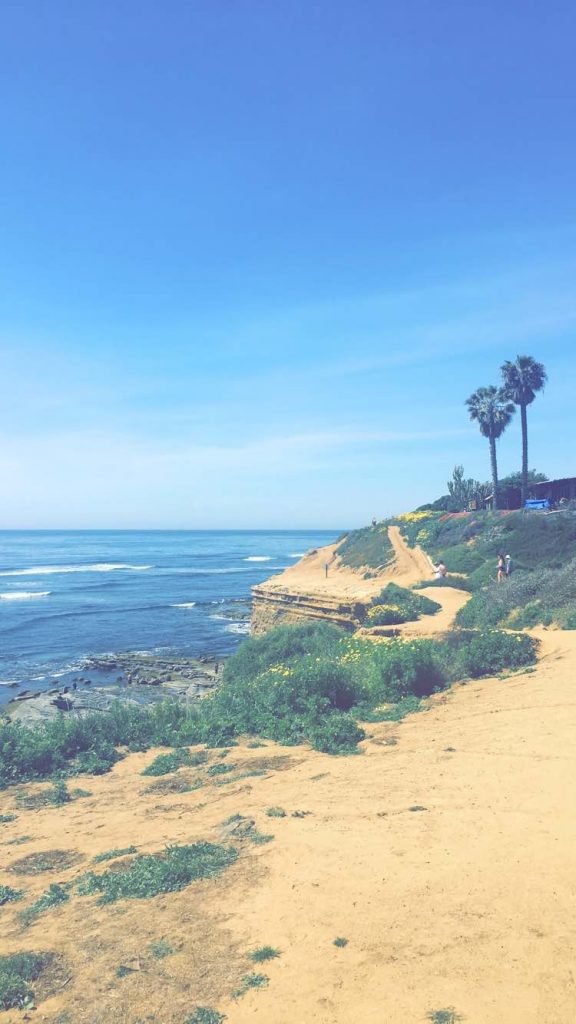 Around 6:00 PM we grabbed dinner at a local sushi restaurant and then had some fun in a nearby arcade bar. I’ve got to say this was one of the best Sundays of the trip so far. We had to cheat on Tom (again) and stay in a hotel for the night before our event in Santa Monica tomorrow.